'Virginia needs a check and balance'

To get a message across bears repeating it, and during our interview with Republican attorney general candidate Jason Miyares, he hit on three points multiple times: 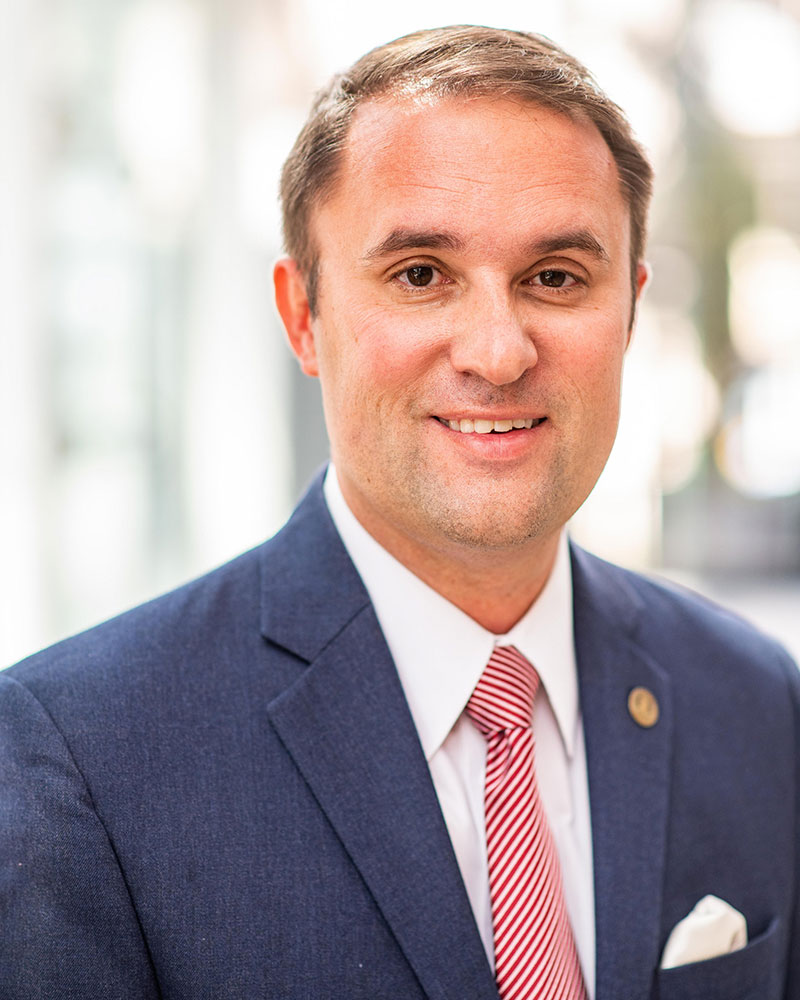 And he believes small businesses need government to stay away unless there’s a dang good reason to intervene.

“I'm excited about what I call ‘The Great Virginia Comeback,’ because I think people desperately understand we need a check and balance in Richmond, and right now we don't have one,” says Jason, who was elected to the 82nd District of the House of Delegates in November 2015 and is the first Cuban-American ever elected to the Virginia General Assembly. “So many business owners feel like nobody has their back. They don't feel like government has their back. I want them to feel they have an attorney general that will always stand for those small business entrepreneurs that are literally just trying to meet a budget and say those most important words you could ever say to somebody, which is, ‘You’re hired.’ Those words can have a transformative impact on a person.”

Jason has brought what he calls “commonsense conservative leadership” and accountability to Richmond, while fighting for fiscal discipline and government transparency. Recognized as a “Champion of Free Enterprise” by the Virginia Chamber of Commerce, Jason has consistently opposed higher taxes and regulations that make it hard for small business owners to expand and thrive.

He has support from former Republican governors Bob McDonnell and George Allen, a lineup of state delegates and senators, Congressmen, and Virginia Republican leaders. In the General Assembly, Jason serves on the General Laws, Courts of Justice and Transportation Committees, where he has worked to build smarter, more accountable government focused on transparency and regulatory reform.

Jason is a champion for dealer rights and has carried dealer-backed legislation. In 2019, he supported the “right of first refusal” bill signed by Gov. Ralph Northam that provides rights to dealers whenever a manufacturer or distributor is eliminated or loses its rights through sale, merger, or otherwise. It was an act designed to protect the assets of new car and truck dealers hoping to sell or expand their business.

​Jason grew up in Virginia Beach, is a graduate of James Madison University and the College of William & Mary, and lives in the Virginia Beach with his wife Page and their three daughters.

“I'm confident about the fall. One of my favorite leaders in world history is Winston Churchill, and he said, ‘Americans always do the right thing after they've exhausted all other options,’” Jason says. “I think Virginians will do the right thing. I think they'll recognize we need a check and balance. I think we're ready to win again.”

Below, our interview with Jason.

Jeff Kelley, VADA Communications: Why should Virginia dealers support you for attorney general?

Jason Miyares: In Richmond, there’s a general sense that there's no check and balance of what's going on. In my opinion, what has been created in the last 24 months in Richmond is a pretty anti-business environment that's really pushed higher regulations, higher taxes, and higher litigation.

I think it's important to have an attorney general that just calls balls and strikes. I think that's absolutely critical. We've seen some activist attorney generals that have the mindset of going after private businesses. I was just with a business owner up in Northern Virginia. He's being sued right now by the attorney general's office, simply because he desired to keep his restaurant open during the pandemic. And as he told me, he said, ‘I had to make a choice between putting food on my family's plate or closing the business that I put my life’s work in.’

There's too many politicians in Richmond that view businesses as the bad guys, and they try and tax you and regulate you and litigate you to death.

Virginia is very much becoming a blue state, or is at a minimum a deep purple. So how do you as a Republican break through that blue wall? How can you win as a Republican candidate?

We have too many politicians in Richmond that have completely forgotten our victims in this whole process.

Dealers have made significant investments in their stores and operations and must abide by stringent state regulations that dictate sales and ensure consumer protections from manufacturers. How should these laws apply to new entrants?

Everybody wants a level playing field. So many of the auto dealers down in the Hampton Roads area I consider personal friends. I'm very familiar with how their operations work, and the regulations and the burdens that are placed on them — not just on the state, but from the manufacturers and the expectations from them.

So they're meeting standards, and they have a business and regulatory cost that is infinitely higher than I think the average Virginian realizes. And then you have somebody like Tesla who comes in and essentially is able to circumvent all of that. And the way they went about doing that, quite frankly...was completely out of bounds. It's not a level playing field.

Everybody needs to operate under the same rules. It's something I'm passionate about. It places so many of our auto dealers behind the eight ball on that front. The whole way that Tesla entered into Virginia was the opposite way of what I think should be open, transparent, and good government.

Listen to our interview with Jason on VADA's High Octane Podcast:

Watch to our interview with Jason on VADA's High Octane Podcast:

I will go from the 80,000 feet view and then get specific: I'm on the Courts of Justice, specifically, the Courts of Justice civil committee. And what I've seen, particularly in the last 24 months, is bill after bill after bill that would raise the cost of doing business in Virginia. You raise the cost of doing business, one, by regulation, and two, by litigation.

If you create a regulatory climate that hurts businesses, that's one thing. But if you create a litigation climate that makes every business owner constantly look over their shoulder and have to defend themselves against lawsuit after lawsuit, it could be absolutely devastating. Now, a lot of my friends and legal community hate that. But the reality is I'm going to stand with the businesses, and not the tort lawyers. And that's the opposite of the legislation you've seen that's come through Virginia.

So yes, I opposed not just the class action lawsuit bill, but also a host of other legislation that would make it easier to sue our private employers. Because I think we already have a really good system in Virginia. I think it's fair, I think it's equitable. But I don't want it to tilt so far that the people that really only benefit are the rich trial lawyers and it crushes these small business owners. Because we've seen in other states — businesses just won't stay. They will get out, they will close, they will sell.

And then the last part is our court system right now is not equipped to handle the class action lawsuits. We don't supply enough paralegals and administrative help for them to handle this.

Give us your thoughts on Virginia's Right-to-Work law. The Right-to-Work law dates back to 1947 in Virginia and prevents unions from forcing workers to pay union dues as a condition of their employment, which effectively weakens organized labor. Repeal of Right to Work has become a dividing line for Virginia Democrats, with more centrists saying it could hurt our upstanding business reputation and progressives pushing it as a major step to help workers and strengthen labor unions.

It has to be protected at all costs. If they repealed right to work, it'd be the greatest economic development legislation for the state of North Carolina in the history of this country.

Because you literally would have businesses that would flee. I was talking to a huge call center in Danville. And they said, ‘Listen, if we even get the hint that this is going to happen, we're literally just going to move 10 miles up the interstate.’ I was talking to my colleague and he was telling me how he was on a call with some folks from BMW, about them trying to expand operations in Virginia. One of the first questions they asked was, ‘We're hearing you may lose right to work, why would we ever subject ourselves to that?’

We are competing with 49 other states, not just to attract businesses here, but to keep the businesses that we already have. The idea of repealing right to work would do so much to devastate Virginia's business climate. There’d be businesses that would not even consider coming here. The idea that we're even having this debate is now being used against us.

When people come to me with legislation, I always ask them three questions: One, what is the problem you're trying to solve? Two, does your bill solve the problem? Three, what's the unintended consequences? Too many people don't ever fathom the unintended consequences of when they pass legislation. If they get rid of right to work, it would be utterly devastating for the Commonwealth business climate and I am 100% opposed.

What is your general philosophy on how the law should be applied?

My philosophy on jurisprudence is justice has to be blind. When it's not blind, people lose faith in the justice system. And what we saw this past summer in Richmond, where you literally had small businesses lose their livelihood — these are the folks that are the first to be there in the morning, last to leave at night — and they were destroyed, and nobody was ever prosecuted. Because the attorney general and the mayor and the governor all believed in and support the political aims of the people doing the destruction and the protesting and the rioting.

That creates such a level of cynicism in our system. I don't care what your political persuasion is. If there was somebody at a conservative rally who violated the law, prosecute them. They should be held accountable. If you do not apply the law equally to everyone in society, then people lose faith and trust in our system, and it just has a corrosive effect.

Motor vehicle dealers are a self-regulating industry with their own oversight board funded entirely by dealers. What is your view on the role of an industry in the regulatory and enforcement activities of the AG’s office?

That’s very similar to how we practice in the legal field. We are a self-regulated body, we have the state bar that's basically lawyers regulating lawyers. I think most people recognize Virginia  auto dealers do it well. We have, I think, one of the best business climates and best climates for auto dealers, and they self-regulate themselves. Because they know if they don't, then they're going to have competition that does it better, but they also know that that the General Assembly would step in, so I support our current structure. I think it works well. I think it protects our dealers, and it protects consumers. They don't need the AG, they don't need a bunch of politicians to come in. They do a very good job self-regulating themselves right now.