The 2023 Virginia General Assembly session convened on Wednesday, January 11 and kicked off with Governor Glenn Youngkin’s State of the Commonwealth address.

Typically, the first week of a session is centered on assignments to various committees that cover particular topics – such as agriculture, energy, technology and, of high importance to dealers, transportation. The House and Senate Transportation Committees remain the same, with Del. Terry Austin (R-Buchanan) as House Chair and Sen. Dave Marsden (D-Burke) as Senate Chair.

A series of special elections last week not only maintained Democratic control in the Senate (Republicans control the House), but expanded the party’s majority from 21-19 to 22-18. This came after Democrat Aaron Rouse picked up Republican Jen Kiggans’ seat in the Virginia Beach area after she was elected to Congress last year. 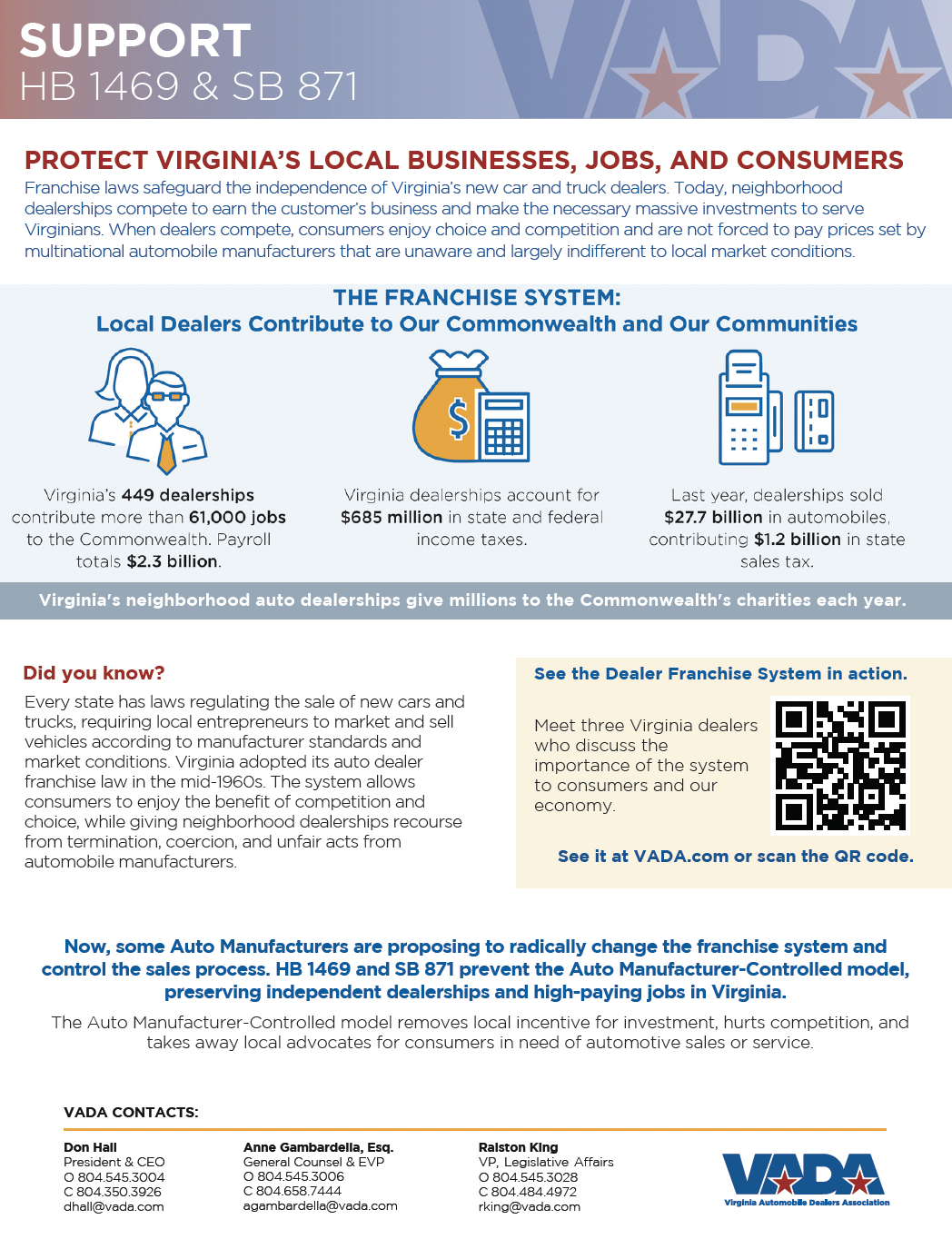 Our bills come as some auto manufacturers plan to control aspects of the sales process, using dealers as mere delivery agents. Our bills prohibit such behaviors in franchise agreements, continuing the current practices of dealers selling cars and trucks and offering financing options, extended service contracts, and ancillary products. The legislation also makes additional changes to strengthen the franchise system.

We spent a large chunk of 2022 in preparation for this session and have been meeting with legislators to stress the importance of the franchise system for consumer choice, lower prices, competition and jobs.

Even in the first week, numerous lawmakers from both chambers and both parties have signed on as supporters. We continue working to make sure both Democrats and Republicans join our growing list of co-patrons and supporters.

Our goal has been to hit the issue at multiple angles within current franchise law, and you can read how the bills work in our one-pager. The Auto Manufacturer-Controlled model would:

The House will review its bill on Tuesday morning at 8 a.m. in a House Transportation subcommittee. We expect the full Senate Transportation Committee to hear the bill on Thursday. Again, please send your representatives an email expressing support for the legislation. You can personalize the pre-written letter if you choose.

We will keep you informed of the bills’ progress as the session moves forward. As always, it is a pleasure to serve the new car and truck dealers of Virginia.