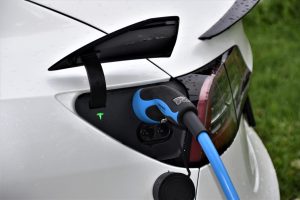 “New car dealers just don’t want to sell electric cars”, we have all heard. Anyone who knows anything about car dealerships knows that is nonsense. But it has gained traction.

It is the Big Lie about electric vehicles. The convenient excuse is that salespeople will not sell electric cars because they require less service. Yes, some maintenance operations are less complex and less expensive than for internal combustion engine (ICE) vehicles, but those savings will be more than offset eventually when the batteries are replaced. Regardless, since when have salespeople cared about the ability of the service department to make money as part of the reason for selling or not selling a vehicle? A salesperson will sell what he or she can make money selling – internal combustion engine, hybrid, or electric. The Big Lie should not have legs, but it does for a simple reason – it works for those who want to use the Big Lie as an excuse for some other goal they wish to achieve.

The disruptors, led by Tesla, have found the lie to be useful. Tesla claims it must own its own dealerships because independently owned dealerships will not sell electric vehicles. A Tesla is the ultimate mode of transportation for a consumer wishing to share how much he or she cares because it is recognizably different from electric vehicles from established manufacturers based on ICE models. Some of Tesla’s business practices have been heavily criticized, whether it was on the road customer testing of the vehicles' autonomous capabilities, advertising practices that would never have been allowed by an established franchisor, or announcing a $35,000 vehicle never really available – a classic bait and switch tactic. Any salesperson would love to sell vehicles in such demand customers worry little about the manufacturer’s business practices.

How has Tesla used the Big Lie? It is the basis of the company’s arguments why it should own its own dealerships. You can expect future disruptors to use similar arguments built on the Big Lie. They will follow the Tesla playbook to avoid working with dealerships owned by dealers independent of the factory. The problem for the other disruptors? As electric cars become more available and recognizably unique from established automakers, will other disruptors be able to build a customer base?

Existing franchisors should be working arm-in-arm with their dealers to develop electric vehicle marketing plans. Unfortunately, too many franchisors want to use electric vehicles to break down dealer’s rights under state franchise laws. Look no further than the recent campaign by General Motors to buy out Cadillac dealers, something that the Cadillac division has wanted to do for two decades. Cadillac has used the Big Lie: “Preparing for an electric fleet is too expensive for many dealers.” or “Dealers don’t want to make that investment since they don’t want to sell electric vehicles.” The apparent goal was to thin the herd of Cadillac dealers. And the tactic is working. According to Automotive News, over 20% of Cadillac dealers are positively considering or have taken Cadillac up on their buyout offers. Where else can dealers expect to see established automakers using the Big Lie?

One import brand has decided it may simply start a new line make for its electric vehicles. A franchisor that starts a new line make may do new dealer agreements and establish new dealers as it chooses, as we have seen with Lexus and Infiniti as examples. Under Virginia law, there are limited things that can be done if a manufacturer starts a separate line make.

Another tactic may be to spinoff existing electric models into a new line make to try to gain the same advantages of new franchise agreements and new dealers. Unfortunately, as Hyundai has seen with Genesis, that can pose challenges. Hyundai experienced substantial legal kickback from its dealers when it tried to take existing models and turn them into a new line make. There is no reason to believe that a franchisor who tries to spin its electric vehicles into a new line make will avoid lawsuits. Under Virginia law, a dealer is entitled to all models of its brand. To simply shift some models to a new brand may lead to lawsuits that this is an unlawful partial termination.

Some manufacturers may decide that they will offer electric vehicles only to those dealers who sign separate agreements to dissuade dealers from signing up. Separate agreements, in themselves, are not necessarily violations of state franchise laws. However, when a franchisor imposes obligations on dealers that are unreasonable, that may be a different story. Dealers are entitled to all models for their line's make of vehicles. Manufacturers can enforce reasonable requirements regarding those models as we have seen with the purchase of special tools and other obligations that can be justified as necessary to sell and service new models. But imposing unreasonable requirements to dissuade some dealers from signing up to sell models under the brand name can lead to lawsuits if the requirements cannot be justified.