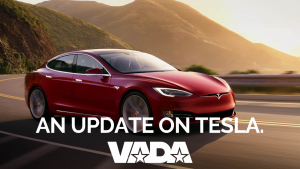 The evenings are getting a bit brighter, the weather a bit warmer, and I hope it has been a prosperous first quarter for each of you.
I write to provide an update on our lawsuit with Tesla, which was recently before the Virginia Court of Appeals. Unfortunately, the court dismissed the case due to our lack of standing. This means the court believes we do not have sufficient reason to bring a case against the EV maker.

As a quick reminder of the Tesla litigation history:

In 2016, the Department of Motor Vehicles allowed us to participate in hearings in which the DMV considered whether Tesla could lawfully own and operate a Tesla dealership in the Richmond area, skirting long-established franchise laws. The DMV Hearing Officer ruled they could not. Then the DMV Commissioner overturned the Hearing Officer decision and ruled they could.
We appealed the Commissioner’s decision to the Richmond Circuit Court, where two VADA members joined us as petitioners. Tesla contended we did not have standing. The judge ruled we did.
That led to some procedural appeals from Tesla to the Court of Appeals and Virginia Supreme Court, which worked out in our favor and kept the case alive. The case went back to the Circuit Court for consideration of the merits (the substance of the case). There, given the high level of deference courts give administrative decisions, the judge affirmed the DMV Commissioner’s ruling despite stating the Commissioner “got it wrong".
As you know, we appealed that Circuit Court decision, asserting the judge erred in his ruling. This brought the entire case to the Virginia Court of Appeals.
There, Tesla again argued we did not have standing. This time, the judges agreed with Tesla and dismissed the case on those procedural grounds.
* * *
The court found that because VADA did not have standing, the dealers who entered the case at the Circuit Court level did not have standing at the time of VADA’s filing. The court did not address any substantive issues we raised in our briefs (the documents submitted outlining our arguments).
This is not the result we wanted. After a substantial financial expense on procedural and substantive debates at the administrative, Circuit Court, and Court of Appeals levels, it was VADA's perceived lack of standing that got us in the end.
Like the Circuit Court judge, we believe the DMV Commissioner “got it wrong” in holding Tesla could lawfully operate a store in the Richmond area. The Court of Appeals never weighed in on the substantive issues given VADA’s perceived lack of standing. But as this legal saga has reminded us, fairness does not always win the day. Once the DMV Commissioner ruled how he did, the extreme deference Virginia law affords agency decisions created an uphill battle for this association.
Of course, it doesn’t have to be over. We have until April 2, 2020 to appeal the Court of Appeals’ procedural finding to the Virginia Supreme Court.
Should VADA appeal? That is an agenda item for VADA’s Executive Committee, which will meet this month. We will review and make recommendations for next steps — if any.
If you have any questions, please do not hesitate to contact me, Anne Gambardella, Esq. or Tommy Lukish. Their contact information is at the bottom of this email.
As always, it is a pleasure to serve the new car and truck dealers of Virginia.
Sincerely,