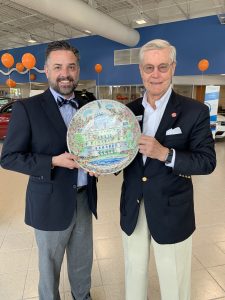 When you’re committed to both your customers and your industry, people take notice.

And last month, NADA honored our own H. Carter Myers III for 25 years of service with the Presidents Club Award. The accolade recognizes Myers, executive chairman of Carter Myers Automotive, for his legacy of advocating for the industry and his peers.

During his many years working with NADA – where he served as chair in 2002– Myers was instrumental in national legislative areas. From that firsthand experience, he encourages every dealer to get involved in influencing regulatory matters that can impact our business.

“As important as franchise laws are at the state level, mandatory binding and arbitration would not get passed without the strong efforts of NADA and its members’ relationships with key legislators,” said Myers, who notes that NADA is well-connected on Capitol Hill. “The NADA PAC is important, and it’s equally important for dealers to become involved and engaged in the advocacy process.”

His contributions with NADA were important in recent regulations related to new tax bills, “last in/first out” accounting, and keeping recalls under control.

Myers' national leadership evolved after spending many years supporting initiatives with VADA, where he was chair in 1995. VADA programs including the annual Dealer Day at the Capital, scheduled for Jan. 23, provide a good starting point for dealers to learn more about the legislative process and how to share their voices effectively.

In 1965, Myers joined the company his grandfather founded in 1924. Less than a decade later, he was elected president and today serves as executive chairman. Today, Carter Myers Automotive operates 13 dealerships and 16 franchises in Central Virginia. Now led by fourth-generation owner Liza Myers Borches, the business has more than 750 employees and offers an Employee Stock Ownership Plan.

Among his other major honors are TIME Magazine Virginia Dealer of the Year in 2010 and a Lifetime Achievement Award from the American International Automobile Dealers Association in 2016.