Today at Richmond Ford Lincoln, Del. Jeff Bourne and representatives of the Virginia Automobile Dealers Association presented Ron Kody, president of Richmond Ford Lincoln and  2019 Time magazine Quality Automobile Dealer of the Year Nominee for Virginia, with a resolution passed earlier this year in the General Assembly. "The work he does in the community far outweighs the value of every car that is sold by Richmond Ford," said Del. Jeff Bourne, 71st District member of the House of Delegates. 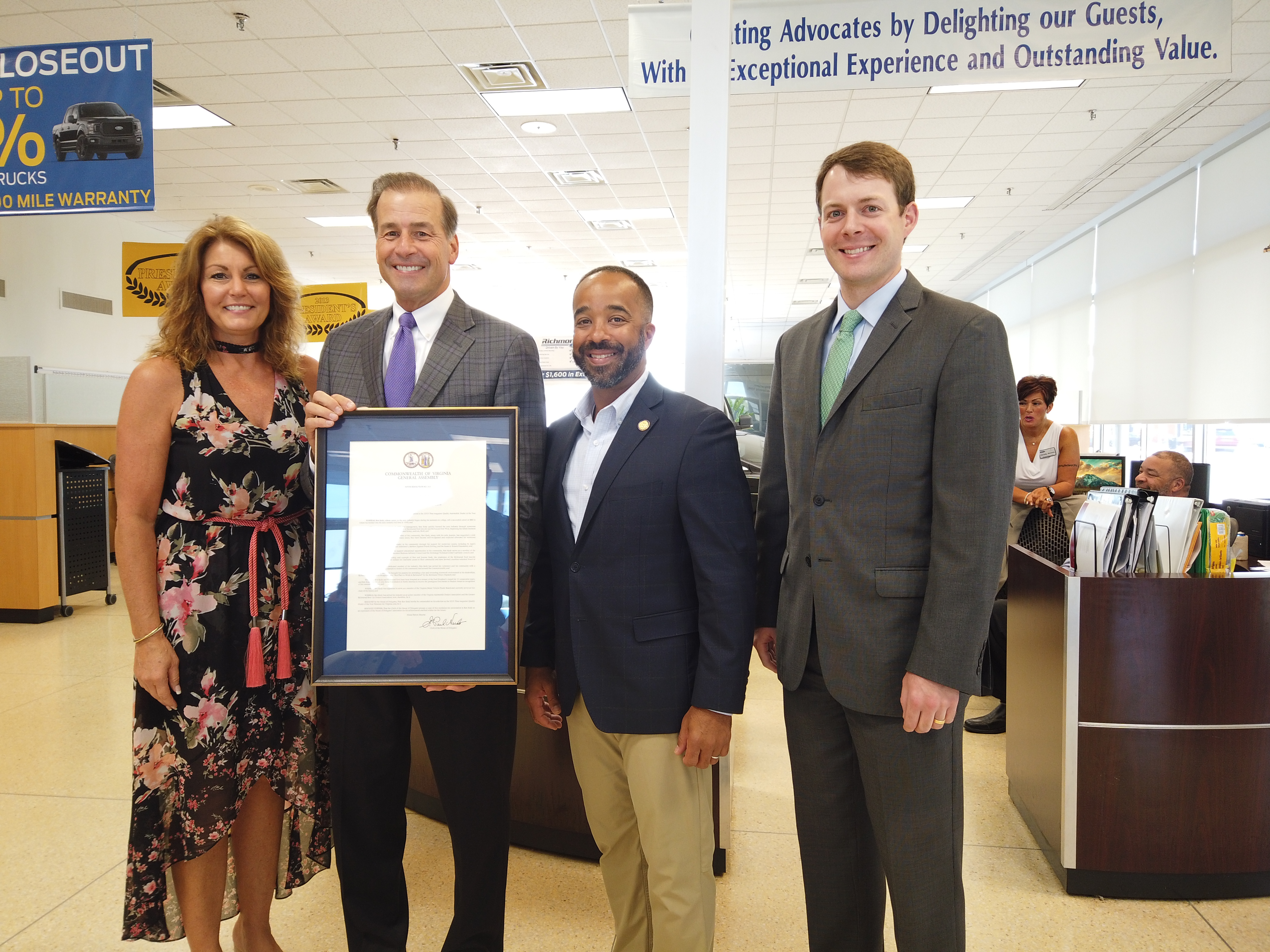 Ron Kody and his wife, Jeanine, along with Del. Jeff Bourne and VADA's Tommy Lukish. Ron was presented today with the House of Delegates resolution honoring him and the entire Richmond Ford Lincoln team.

Agreed to by the House of Delegates, February 19, 2019WHEREAS, Ron Kody of Richmond Ford Lincoln in Richmond is the 2019 Time magazine Quality Automobile Dealer of the Year Nominee for Virginia; and

WHEREAS, with his experience in sales and management, Ron Kody quickly learned the auto industry through numerous positions in other dealerships and became the owner of Richmond Ford Lincoln and Richmond Ford West, beginning his family business and looking to the future with his daughters, Kayla and Kelsey, and son, Brett; and

WHEREAS, an active and dedicated member of his community, Ron Kody, along with his wife, Jeanine, has supported a wide array of industry and community causes for many years; they have become well-recognized and respected advocates for numerous community events; and

WHEREAS, Ron Kody has been a leader in his community through his support for numerous causes, including St. Jude’s Children’s Research Hospital, the Walk to End Alzheimer’s, Mothers Against Drunk Driving, and the Susan G. Komen Foundation; and

WHEREAS, recognizing the need to support educational opportunities in his community, Ron Kody serves as a member of the Henrico County Career and Technical Education Business Advisory Council and the Hermitage Technical Center’s advisory council; and

WHEREAS, through the leadership and example of Ron and Jeanine Kody, the employees of the Richmond Ford Lincoln organization have raised more than $1 million for charitable causes in their community and have devoted countless volunteer hours to those efforts; and

WHEREAS, an active and dedicated member of his industry, Ron Kody has served his customers and his community with a generous spirit, and has been an example to dealers in his community and around the Commonwealth; and

WHEREAS, because Ron Kody brought his passion for providing a fun and rewarding teamwork environment to his dealerships, Richmond Ford has been recognized as a “Best Place to Work in Richmond” by the Richmond Times-Dispatch; and

WHEREAS, Ron Kody and Richmond Ford have been honored as a winner of the Ford President’s Award for 11 consecutive years, and Ron Kody was one of only three Ford dealers in North America to receive the prestigious Ford Salute to Dealers Award in recognition of his community service; and

WHEREAS, Ron Kody was appointed to serve as a member of the Virginia Motor Vehicle Dealer Board and currently serves as vice chair of the board; and

RESOLVED by the House of Delegates, That Ron Kody hereby be commended on his selection as the 2019 Time magazine Quality Dealer of the Year Nominee for Virginia; and, be it