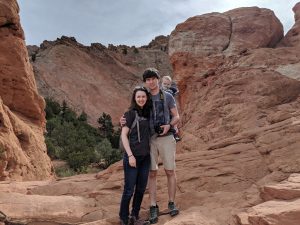 This is one in a series of profiles of VADA and Integrum Advisors team members. With these profiles, we ask them to share a story - funny, touching, insightful, or meaningful. Here's John Anderson, our IT director.

In the mid-1990s, friends gave John Anderson’s family a used laptop for him and his siblings. He recalls it was about 2 inches thick and weighed at least 5 pounds. And it didn’t come with a manual on how to operate it.

“Remember, this was before you could Google anything, so you just had to play around with it to figure out how it worked – and how to play a game I wanted to play,” he says. “There was a lot of trial and error, and that played a big part of how I got interested in computers and technology.”

Given that he was a veteran tinkerer even at age 8, he was up to the challenge. “Growing up, I enjoyed taking things apart and figured out how to fix things that were broken,” he adds.

As a student at Virginia Commonwealth University in his Richmond hometown, John pursued a degree in computer science. Through his connections with VADA’s former technology consultants, he started working here part time during college. A full-time technology job here was waiting for him after graduation in 2013.

As VADA’s IT director, John keeps the organization’s technological infrastructure running day to day and ensuring team members have the tools and resources to work efficiently. He also manages major initiatives, such as planning and implementing a new Customer Relationship Management system recently for Integrum Advisors.

“Find a job you love at a place where you like working - and surround yourself with people you enjoy.”